Iran Darroudi is a revered paint er, director, writer, art critic and university professor. She was born in 1936 in Khorasan to a prominent dynasty. Her paternal family were well-known merchants in the north-eastern province, while her maternal family were caucasian merchants, who travelled to Iran following the Soviet Revolution and took residence in Mashhad.

Darroudi discovered her passion for painting at a young age. After completing her secondary school education, she travelled to France and continued her studies at the University of Fine Arts (École des Beaux-Art).

To learn the secrets of successful colour mixing, she headed to the Belgian capital and attained a course in “stained glass” at The Imperial and Royal Academy of Brussels. Darroudi completed her education with a degree in the History of Art at Ecole du Louvre in Paris.

In 1968 Darroudi was commissioned by the ITT corporation to create an artwork, entitled Iranian Petroleum, on the occasion of the launch of a pipeline from Abadan to Mashahr. The painting generated a great deal of media interest and was published in the likes of Time magazine, Newsweek and Life Magazine — to name but a few.

The artwork was later dubbed “Our Veins, the Earth’s Veins,” by Ahmad Shamlu, a distinguished poet. Darroudi continues to add to her ever-growing collection. To date she has held 60 exhibitions worldwide, and contributed to some 200 group exhibitions across Europe, Central America, Japan and of course her homeland.

In 1966 she began to learn directing at the RCL institute in New York City. That’s where she met her husband, Parviz Moghadasi, who was also studying television directing at the time. The two began to collaborate with each-other on various projects at a newly established television production company.

Over the period of six years, they produced over 80 documentaries about both and international artists. Her work was consequently recognised by university of Sharif, where she was invited to lecture the History of Art as an honorary professor.

Darroudi’s lifetime achievements include her 60 individual exhibitions and 200 group exhibitions, art critiques published in various newspapers, colourful speeches in cultural and artistic establishments around the world, some 80 collaborative documentaries, and last but not least an autobiography, “Distance Between Two Dots”.

These are the results of more than 50 years of her work in Contemporary Art. The same activities that she carried out while rubbing shoulders with great individuals such as Andrew Marlowe, Salvador Dali, Jean Cocteau, Antonio Rodriguez, Ahmad Shamloo etc.

Today she’s hailed as one of the most influential artists in the world, with her artwork displayed at internationally recognised venues such as the Tehran Museum of Contemporary Arts, the Kerman Museum of Fine Arts, the Sa’dabad Palace, the Saheb Gharani-e Palace, Belgium’s Ixelles Museum and a number of exhibitions of Contemporary Art in New York.

Her latest project takes Darroudi back to her motherland, where she has donated some 150 works of art to a foundation named after her to be put on permanent display for the people.

Iran Darroudi, is well known in the modern art scene. She is especially recognized by her unique choice of colors and settings, which are inspired by her internal aspirations. These aspirations reveal themselves through the artist’s brush in different ways, and her dreams and despair thereby reveal and reflect the viewer’s hopefulness and impatience.

The book of “An interview with Darroudi” has come through a friendly interview between Iran Darroudi and Mr. Mehdi Mozaffari Savoji that covers her private, social and professional life. Occasionally this interview uncovers her hidden sufferings and also shows how she has overcome difficulties by her resilient spirit.

A look at the life and art of Ms. Iran Darroudi, one of the most important contemporary painters, who has divided her time between Tehran and Paris for the past fifty years. The film describes the various influences in her life and how she came to cultivate a style that merges the western surrealism with eastern mysticism.

Iran Darroudi is a revered painter, director, writer, art critic and university professor. She was born in 1936 in Khorasan to a prominent dynasty. Her paternal family were well-known merchants in the north-eastern province, while her maternal family were caucasian merchants, who travelled to Iran following the Soviet Revolution and took residence in Mashhad.

Darroudi discovered her passion for painting at a young age. After completing her secondary school education, she travelled to France and continued her studies at the University of Fine Arts (École des Beaux-Art).

A new chapter has opened for artists enjoying a boom in sales and interest from major international auction houses such as Christie’s despite a global economic malaise and sanctions hitting.

Works by painters have been selling for fairly high prices, not only outside Iran’s borders but also inside the state where are facing economic hardship. Darroudi, who champions the work of women artists and has had many exhibitions throughout the world is also happy with the buoyant market, but says Iranians buy art for enjoyment and education not investment.

The leading artist Darroudi is funding a new museum due to open in the Yousef Abad neighbourhood of Tehran. The ground-breaking ceremony took place earlier this month on Darroudi’s 80th birthday. According to the Financial Tribune website, the new museum is scheduled to open in 18 months.

City officials donated a plot of land for the new building, which will double up as a cultural and education centre. “Darroudi has donated 195 of her pieces from the 1960s to today, to be permanently exhibited in the museum,” a project spokeswoman says. 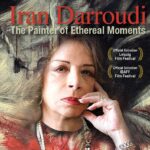 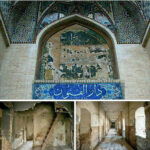 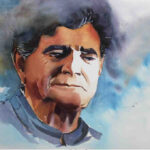